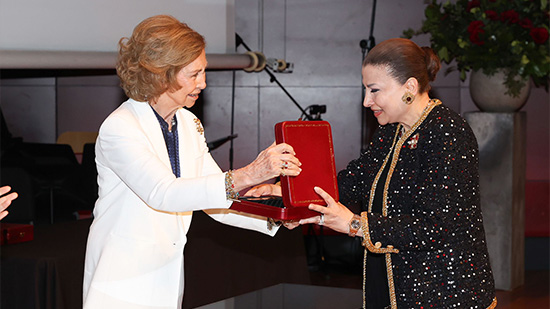 On June 23rd, 2022, H.E. Huda Alkhamis-Kanoo became the first in the Arab world to receive the Medal of Honour from H.M. Queen Sofía of Spain at the 2021-2022 closing ceremony of the Reina Sofía School of Music which took place at the Queen Sofia National Museum Art Centre in Madrid. The Founder of ADMAF and Founder and Artistic Director of Abu Dhabi Festival was presented with the prestigious award in recognition of her tireless commitment to the development of music culture and education. Upon receiving the highest distinction awarded by the Queen at the ceremony, Her Excellency dedicated her accomplishments to H.H. Sheikha Fatima bint Mubarak, Mother of the Nation, whose unwavering support she says “empowers women throughout the UAE”.

The Medal of Honour is the highest distinction awarded each year by the Queen at the Reina Sofía School of Music to individuals or organizations that have given outstanding support to the School, and to the dissemination and development of musical culture. Paloma O’Shea, Founder and current President of the Reina Sofía School of Music expressed her admiration for Her Excellency who she says, “turned Abu Dhabi into an international cultural reference point”. Present at the ceremony was H.E. Majid Al Suwaidi, Ambassador of the UAE to Spain, who praised Her Excellency for being “a crucial actor in the creation and development of cultural collaborations between the UAE and Spain.”