Through film screenings and intensive training programmes, Young Filmmakers’ Circle enhances the talent of directors, screenwriter, producers and technical specialists. Annually, a select group of filmmakers receive training from some of the region’s pioneers. With a different focus for each edition, the programme develops broad skills and nurtures the local creative community by making new connections. For the wider public, film screenings showcase the best of the regional creative scene, providing entertainment and exposure for local filmmakers.

In accordance with the ADMAF mission of providing a world stage for young budding UAE filmmakers, we have formed a partnership programme with world renowned Film Academy Baden-Württemberg and Orient Meets Occident.

Held in collaboration with the German Embassy in Abu Dhabi, the Goethe-Institut Gulf Region and Cinema Akil in Dubai, the Gulf German Film Festival, runs from Thursday to Saturday, November 19 to 21 and takes place at Cinema Akil, but will also be live-streamed throughout the UAE and Bahrain. During this edition of the festival, two of the films created in the ADMAF Education and Community initiative, Young Filmmaker’s Circle, will be screened.

Hamda is a 31 years old Emirati woman who is currently working as a freelance filmmaker in the UAE with the hopes to build a good network and find the right people to work with. In order to learn all about filmmaking, Hamda has worked on multiple positions such as First Assistant Director, Sound Mixer, First Assistant Camera, and Script. In the near future, her dream is to direct her own film scripts she is working on. Her late father introduced her to the movies, he would gather her siblings and she would play a film from his collection.

Sachin Augustien is a 27 years old Indian, who has grown up and lived in the UAE for the past 23 years. He is currently working in the travel and tourism industry.

He first realized that he wanted to make films when he was doing his Bachelors in Singapore and had to work on a short film project for the first time. Since then, there was no turning back, he says.
In 2017 he was part of the Arab Film Studio Narrative program. Here he was able to write and direct a short film ‐ which has been screened in multiple festivals worldwide. For the future he hopes to be able to hone his skills as a filmmaker and forge a career out of his passion and love for films.

Sharing stories from UAE to the rest of the world.

PARTICIPANTS WORKING ON A SHORT FILM 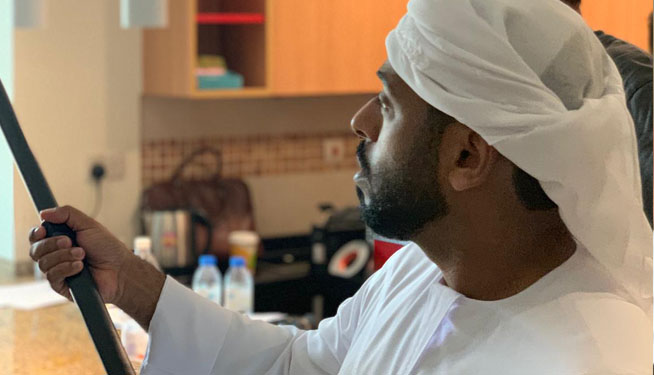 Short Films from the Arab World

The public joined members of the Young Filmmakers Circle for an evening of short films from the Arab world, with a panel discussion on the art form, moderated by artist and writer Hind Mezaina, with filmmaker Amena Al Nowais, educator Greg Unaru, and partner of MAD Solutions Abdallah Al Shami. Screeners included: ‘Omnia’, Amna Al Nowais’ powerful short film that explores the psychological and physical effects of female circumcision; ‘Ave Maria’, a comedy that tells the story of the Nuns of the Sisters of Mercy – located in the in the West Bank wilderness, their daily routine of silence and prayer is disrupted when a family of religious settlers crash their car into the convent’s wall; and concluded with ‘Ayny’, an animated short film about two young boys who have run away from their mother’s protection into war, following their dream of playing an Oud.

In partnership with the Film and New Media NYU Abu Dhabi 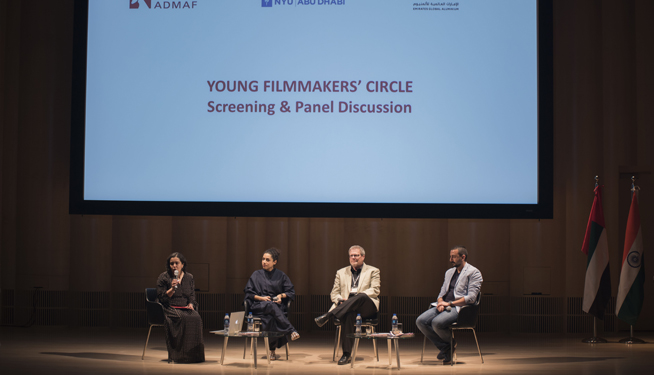